Fungibility is one of the desired properties of money. You want every unit of money to be worth exactly its face value and be interchangeable for any other unit of money you have. Even if one coin is shiny and new, while another coin is old and worn down, you don't want people to be valuing them at different rates - currency as a physical representation of money should not have value in itself, it should represent value.

However, what do you do if you want to use something non-fungible as a basis of your currency? Whether it's weak non-fungibility like serialized gold bars (you want to identify each bar uniquely, but the properties of the actual bars are pretty similar), or very strong non-fungibility like unique art? In other words, is there some sane way to transact in a Mona Lisa "coin"? Lets explore that today!

In our current world, pretty much every currency is fungible. One dollar bill is pretty much the same as another dollar bill. However, if one really wanted to, you could try tracking each individual bill with its serial number. It might not be very practical in the real world, but if we're talking about "digital cash", some people had a similar idea.

We discussed the issues relating to "Bitcoin redlists" awhile back. To sum everything up quickly, Bitcoin is like cash - you should accept it at face value and treat it as a fungible currency, but every Bitcoin transaction inherits the history of its predecessors. In this sense, it's similar to tracking banknote serial numbers - if someone claims a certain note was stolen and it turns out in your pocket at some time in the future, there may be some legal precedents to be set there as to whether you should forfeit those bitcoins or not. So while bitcoins are fairly fungible, the radical transparency of the system may make it less fungible, for better or for worse.

When we go ahead and consider the Crypto 2.0s out there, we generally see two approaches. One is "the blockchain approach" - to act like Bitcoin with each transaction spending the outputs of a previous transaction (like Colored Coins). The second one is "the ledger approach" - to track individual balances and changes in those balances, rather than individual inputs and outputs of a transaction (like Ripple). The latter approach appears to be more fungible - you're not spending any specific outputs, but at the same time any tainted transaction could be a proverbial polish "łyżka dziegciu w beczce miodu" (or english equivalent - "a fly in the ointment") - one bad transaction could make the whole account balance tainted in some way.

When we're talking about gold-backed currencies, we're generally talking about fungible currencies like the ones from Ripple Singapore or BitGold. This is perhaps the easiest approach - gold is stored in a number of vaults and is audited on regular basis. Those audits work as a proof of reserves that are used to back the currency. There might be some difference between gold held at various locations, and one could account for that by issuing different currencies for different locations with some fixed or free market between them. These can be aggregated into national or global currencies as needed: 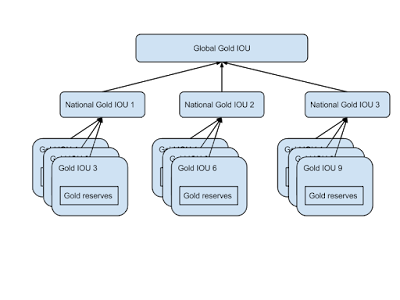 This local / national / global currency IOUs can be easily mapped in the existing Crypto 2.0 systems such as Ripple. The individual gold bars in each reserve form a currency basket that is used to back the IOUs. National and Global IOUs are backed by the individual IOUs.

Now, what happens when we want to be able to identify each gold bar individually and transact in a currency based on that, rather than a basket of gold bars? The best approach available with the current 2.0 systems is to create an individual currency for each individual bar and set some redemption rules (for example - anyone holding 60% of the IOUs can pay the remaining holders the market value of the remaining IOUs and redeem the bar in its entirety). The system is fairly straightforward when we're dealing in whole bars rather than letting people split them up, but both options have their advantages.

That being said, this solution isn't elegant. The problem calls for a new type of approach based on storing arbitrary data, rather than trust-debt relationship.

What matters to a physical gold bar to be used as a currency? Transparency, its current location, as well as who owns it at this moment. This could be encapsulated in a straightforward JSON:

If rules on how this information is updated are encoded in a smart contract and all transactions go through a distributed blockchain system for transparency and verifiable history, you achieve a much more elegant solution. While I don't know of any publicly released Crypto 2.0 system that can achieve that natively without relying on any "hacks", it does appear that the upcoming Ethereum platform might be an ideal candidate to achieve this goal.

Some pieces of art are valuable. Some in fact, are very valuable. The most expensive painting ever sold (at ~$300M) eclipses the market cap of any cryptocurrency asides Bitcoin (at the moment of writing - Bitcoin has the market cap of $3.3B, Ripple - $211M, Litecoin - $56M). Criminals already use pieces of art as a form of currency, since anything that can be used as a currency will be used as a currency if the need arises.

Now, what would happen if someone decided to create a currency backed by an expensive piece of art in a legitimate fashion? In other words, could we have some form of "Mona Lisa Coin"?

The issuance of the coin is probably the easiest part of this process. The real challenge comes in determining what rules the coin itself should follow, especially when it comes to redeeming the piece of art. Similar to the gold example, the rules could be that the piece of art remains in a museum until such time that someone purchases a majority / super majority of the tokens and decides to buy back the remaining tokens at the current market value to obtain the physical piece of art.

You could also govern the piece of art through a Decentralized Autonomous Organization - everyone holding the art token could vote on renting the piece out to other museums for a fee shared with the DAO, as well as other matters of importance.

If an individual painting is not significant enough, perhaps a collection of pieces of art could be bundled together in an "art basket" and tokens could be issued for the entire collection. In this example the role of DAO could be to govern the rules of acquiring and selling individual pieces of art from the collection - perhaps X amount of tokens would need to be burned in order to buy one art piece from the collection, and new tokens could be created to pay a new shareholder depositing their piece of art into the basket.

Using various approaches and appropriate Crypto 2.0 systems, it is possible to create fungible currencies out of non-fungible commodities.
Posted by ThePiachu at 23:04:00