Corda and the Distributed Ledger Technology

Recently I became involved with SCC's committee on "Blockchain and electronic distributed ledger technologies". During one of the discussions, I've learned about a new term that seems to have become very popular in the banking industry - "Distributed Ledger Technology" (DLT). Apparently companies like Deloitte or even the UK government have picked up on this new thing and seem to be abuzz with it.

Instantly this reminded me of 2015 when big companies like NASDAQ and Overstock expressed their interest with "the Bitcoin technology", but they didn't want to be associated with "Bitcoin", therefore decided to rename this whole thing as "blockchain technology". Maybe this was just another way for companies to invent a new five dollar word and charge a hefty sum to consult on it?

After doing some research, I couldn't find much on what exactly DLTs were - there doesn't seem to be a concrete definition floating around yet. However, a few people pointed me to one example of an actual implementation of a DLT - Corda. Lucky enough, someone coincidentally decided to organize a meetup about Corda around the time, so I had some good opportunity to learn what it's about.


Corda is a Distributed Ledger Technology implementation by the R3 consortium. It is open source, comes with a Slack, a whitepaper and all that.

Corda has been created from the grounds-up for the use by banks and other financial institutions, prioritising their needs first. This dictated a few important design choices:


Knowing these features, we can try figuring out what existing cryptocurrency project it resembles most. Looking at this chart comparing various projects in the space (provided funnily enough by Tim Swanson a few years back before he joined R3): 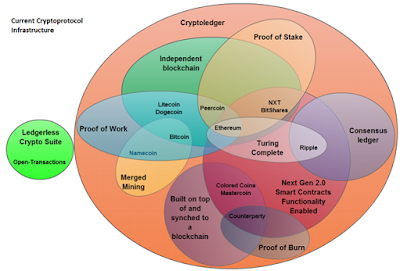 It looks like Corda can fall in only one spot, which is the "Ledgerless Crypto Suite", alongside Open-Transactions. Indeed, the resemblance is quite strong.

The following explanation is based on the "Introduction to Corda" presentation and other materials I managed to come by.

Corda's base building block is a cryptographic transaction. It can be a simple payment, or a more complex smart contract. The transactions specify which inputs they are spending and what outputs they are generating (this works just like Bitcoin and is different from an "account-balance" approach of say, Ripple). Each transaction has a hash of a legal prose attached to it which governs how the transaction should operate. The transaction is then signed by all of the participating parties that agree to execute it - it could only be one entity when it is a simple "send money" transaction, or span multiple parties if it is a more complex swap or financial agreement.

After a transaction is signed, that's about it - every party that knows about the transaction records it in their ledgers and the financial contract is thus binding. There might be some follow-up on the smart contract as it matures or other trigger points execute it, but with no blockchain, block generation or the like, there isn't much else to it.

As it stands, Corda seems to fit in as a common middleware for banks and financial institutions to standardise their interactions with one another, especially in the realm of financial contracts. This puts the project in a similar space to Open Transactions or Interledger, not too far from Ripple or Ethereum.


Due to its focus on catering to the financial institutions, Corda might be seen as "more of the same", rather than trying to revolutionise the field like Bitcoin. Some people might dismiss it out of principle for not fighting to make the banks more transparent.

A system built on private transactions will be easier to manipulate than a proper blockchain. Unless all of the transactions need to be accounted for by some independent auditor, you loose the option to have "negative proofs". Since the amount of parties involved is so small, they can easily conspire to rewrite or delete the past transactions to suit their present needs. This could be mitigated by using a proof of existence and anchoring the various hashes of transactions into something like Factom.

However, if properly maintained, the system can enforce accountability. While the transactions may not be a part of a blockchain, they do form a transaction chain - every transaction spending the previous output. Having any single transaction signed by the various parties could be used against them - they might be compelled to provide the full, unbroken chain of transactions leading up to that transaction. While this might not uncover all of the transaction branches, there is at least some cryptographic trace of what happened.

Linking the legal prose to the smart contract is also asking for trouble. Even now people can have legal disagreements as to which interpretation should take precedent when you have a contract written in two human languages. Woe to anyone who wishes to mix legal prose with a smart contract. This would either require a new profession of some lawyer-programmer, some sort of legalese language interpreter / compiler, or the smart contract will be just a farce that could be overturned so easily it might not even need to exist.

Corda's presentation seems to indicate the legal prose takes precedent over the code. This might mean that there would need to either be some backdoor for third parties to overwrite or amend the contract, or the parties involved would have to work around the code to achieve settlement in the end. All in all, this can lead to a lot of mess in the code down the line. Some might prefer the approach of "code is law", but then we have the story of the DAO as a cautionary tale.

Moreover, the contracts dealing with international law and regulations would be even more complicated. This could lead to fewer transactions taking place between various jurisdictions to avoid the legal hassle.

Beyond that, Corda seems to rely on a few known key actors common to the Crypto 2.0 space. Lack of native currency means the system will need gateways to issue assets. Some design documents mention Smart Oracles, etc.


Based on the example of Corda and Open Transactions, we can try drawing some conclusions of what the Distributed Ledger Technologies might be as a general term.

Distributed Ledger Technologies seem to sound more impressive than they are in reality. Some have proposed to use this term to refer to things like Corda as well as the existing Blockchain Technologies, but it seems to be mostly an unnecessary buzzword. The existing DLTs are not really distributed, but decentralised. The word "ledger" correlates more closely to a block of transactions than what we have in Open Transactions (where you can discard old transactions as they are not needed once they are confirmed spent). So perhaps a more accurate term would be "decentralised set of transactions"? DSoTs? DSoTTs if you want to include "technology" at the end as well...
Posted by ThePiachu at 09:26:00