Continuing the tradition, I would like to once again look at how the last year of /r/Bitcoin moderation played out.

There is no denying it - the last year was largely shaped by the two most divisive forks in Bitcoin history - the Bitcoin Cash hard fork and the SegWit soft fork. Both were a culmination of years of the scaling debate buildup. While some believed only one of those forks would survive in the long term, by now it is safe to say - BTC and BCH are both here to stay and the community will be forever divided on this matter.

This split runs quite deep - we have BTC vs BCH, /r/Bitcoin cs /r/BTC, Bitcoin.org vs Bitcoin.com and so on and so on. The hard stance of /r/Bitcoin on the removal of hard fork discussion is partially to blame for the divide being both so serious and so hostile. Perhaps facilitating the discussions would have eased the tensions ahead of time and make the split less of a political dichotomy. Nowadays you only see the former members of the same community hating on one another and wearing being banned from the other camp as a badge of honour.

That is not to say, however, that the subreddit moderators are the only ones to blame. There are a number of other key actors at play here, but who you point fingers at depends on what you want to believe. So here are some possible reasons the forks did play out the way they did.

Potential reasons for the split

First, there is the Covert Asicboost. With Bitmain earning $4B in profits last year, there is clearly a lot of money on the line. If you believe Bitmain might've been using Covert Asicboost in their miners, it would've meant they were in danger of losing a lot of revenue in the SegWit fork, meaning they had a large incentive to create the fork that would preserve their advantage. Even a marginal increase in the amount of coins they could've generated would mean earning potentially millions more.

Secondly, there is SegWit and Blockstream. The company has been working on SegWit for years now, and it was pretty obvious a number of their core technology relied on that functionality being part of Bitcoin. Clearly, they would stand to benefit from Bitcoin forking into SegWit rather than increasing the block size, or even doing both. Employing a number of core devs, they also had some means of blocking other approaches to scaling. Add to that allegations of Blockstream being in the pockets of banks and standing to benefit from full mempool and you start seeing why some people are suspicious. If this side of the story was true, SegWit fork was bound to happen, and people that wanted to preserve Bitcoin that was would either have to not follow through with the fork, or make a fork of their own.

Thirdly, there are always people wanting to make some money opportunistically. Just like with the Ethereum Classic fork, there is some non-zero value to be extracted from the shared chain history. Ramp up the hype, the FUD, roll our some celebrity voices and you will inevitably end up with more money down the line than what you started with, especially if you have a lot of BTC to begin with.

Lastly, there are some people in every community that either want adulation, or want to be seen as the smartest, most important people doing the right thing. They are unwilling to compromise, and if they can get their way, they might just seize the opportunity. You can see them on both sides of the forks now, often talking the loudest and making the boldest statements. Claiming they are the ones chosen to fulfil the vision of Satoshi, that the other side is corrupt and clearly in the wrong.

So what has caused and aggravated the divide? Probably everything mentioned above to one extent or another. Some aspects of the forks were motivated by devs doing their honest best job to make Bitcoin better, some were probably motivated by the money to be made from either of the two solutions. The divide was then probably widened and further aggravated by people wanting to make money on it (perhaps buying up coins from people leaving one side of the fork before promoting that coin into new heights with a new wave of vocal supporters). Then seeing that neither side of the fork will clearly kill off the other, a tribalism equilibrium would be reached:

Two sides forever fighting and talking within their group about how much they hate the other group. Sounds familiar...

And thus we end up where we are today - having two groups that spend a lot of resources hating on one another, demanding clear stances from everyone on which side of the fence they reside, erecting totems of what they hate about the other group and so on and so forth. This approach is clearly more successful, as pretty much nobody is talking anymore about Bitcoin Gold or Bitcoin Diamond, while the first divide is all the rage.

A lot of other things surrounding the /r/Bitcoin moderation have roots in the above story. SegWit2x discussion was similar to the other forks - mostly removed. You also see periodic waves of spam activities, as well a general increase of the baseline spam activity, all surrounding the promotion of BCH and /r/btc, complaining about the censorship, or trolling the non-Bitcoin-Cash Bitcoin as being a centralised scam or the like. There have been reports of a bot spam attack as well.

Then you sometimes find people that are just asking to be banned: 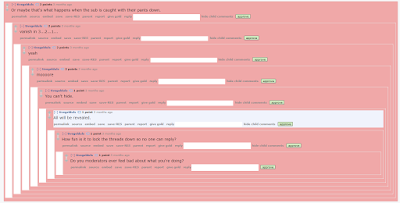 I guess the only nice thing of note for this year was the quality of memes for when Bitcoin reached 9000 USD/BTC.

In the last year, the Bitcoin community has permanently split itself between BTC and BCH. This divide has grown into a very divisive rivalry between members of a number of communities, including /r/Bitcoin and /r/BTC . By now it's clear the divide will never be fully healed.
Posted by ThePiachu at 01:00:00