The crypto markets seem to be in another bubble, orders of magnitude bigger than the last. However, this time a lot of the money is flowing into altcoins interestingly enough. How this situation will play out and where the market will stabilise at will be a really interesting story to watch unfold - whether Bitcoin will re-capture the market, or will some other crypto take its place. I would like to take this time to go over some of the history that brought us here however, as it's also a fascinating tale (if you like graphs).

Here is a short version of the story, in one graph by Woobull: 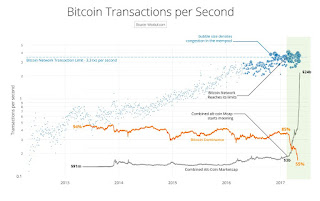 
This is a cautionary tale for Bitcoin, but before we can really talk about how Bitcoin might be impacted, we have to talk about some altcoins. So strap yourself in for this whale of a tale in 9 charts...


The story of this bubble really starts around 2015, when some Bitcoin core developers wanted to address the network congestion they saw coming in Bitcoin. This was the start of the Bitcoin scaling debate that gave rise to BitcoinXT, Bitcoin Unlimited, SegWit, UASF, etc. The writing was on the walls - if Bitcoin continued to grow in popularity, soon the blocks would be full and we would have to deal with the consequences. Two years have passed, and no consensus has been reached, thus priming us for the current events.


The bubble proper was started by the disagreement on how to scale Bitcoin. At the moment, there were two major solutions being proposed to address the issue - SegWit and Bitcoin Unlimited. Perhaps tired of waiting for consensus to emerge, perhaps prompted by Roger Ver's ambitions, Bitcoin Unlimited started to rally people behind its hard fork. Those came in two main waves - around October 2016, and March 2017, increasing both node count and number of blocks mined.

The fact that Bitcoin Unlimited was gaining momentum, coupled with rumours of a planned 51% attack to cull a network split made serious waves in the community. We were faced with a real possibility that the network will fork and perhaps split. Every major player was taking sides in the discussion, and the tensions kept rising. The problem got exacerbated by the Covert ASICBOOST scandal. If Bitcoin had a doomsday clock for the network splitting, it would probably be uncomfortably close to midnight.

With the uncertainty of Bitcoin's future and the rising tensions, other events started to take place.


2016 has been a bit of a rollercoaster for Ethereum. The year started at a sub-dollar price per ETH, reached about 20 USD/ETH due to The DAO, then slumped to about 7 USD/ETH after its hard fork and network split. The new year started on a positive note with a roadmap for the future of Ethereum. ETHs were sitting comfortably at #2 market spot by market cap, increasing a bit with Bitcoin price increases (1, 2, 3, 4) as you'd expect in a calm market.

Then March came along. Bitcoin Unlimited started gaining popularity, and the fear of a potential Bitcoin network split started shaping the market. While historically Bitcoin has been seen as the stable gold standard among cryptos, the safe heaven you'd park your money at if you didn't want to cash out into fiat. However, with the future of the network being uncertain, some people decided to move their wealth elsewhere.

March was the month where Bitcoin slumped and Ethereum was there to pick up the money moving away (1, 2, 3, 4). You can practically see the ~21B USD market cap shifting gently towards Ethereum, giving it a boost from 1.6B USD to 4.6B USD in that month, while Bitcoin went from 20B USD to 15B USD. 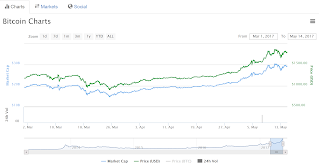 In April the Bitcoin situation started to calm down. Bitcoins started to recover along with their market cap going back to 21B USD by the end of the month (1, 2, 3, 4, 5). However, another important development started brewing elsewhere...


Litecoin has always been "silver to Bitcoin's gold", its shadow. Sometimes outperforming Bitcoin price increases percentage-wise, but rarely making a big splash overall. Seeing Bitcoin stumble with its scaling solutions, it seized on the opportunity to make a name for itself.

What is important to remember, is that Litecoin can be classified as a "copycoin" - a cryptocurrency largely operating similar to Bitcoin, on a pretty similar codebase with minor tweaks. It's so similar, that by chance or negligence, Litecoin's multisig addresses have the same prefix as Bitcoin. Copycoins in general operate on hype and innovation (real or manufactured) - there are so many similar coins that if you don't stand out from the crowd, you're going nowhere.

While Litecoin did not have the network congestion issues of Bitcoin, it still decided to improve its network and push for SegWit adoption. While it looks like the process started in February, there was a considerable rally for SegWit in late March, as indicated by the sudden jump in SegWit blocks and market activity. 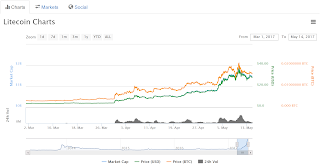 The process was spearheaded by Charlie Lee, the creator of Litecoin. A notable opposition to the SegWit progress were Bitmain and Antpool. Supposedly they were blocking Litecoin's SegWit activation to prevent further SegWit adoption on the Bitcoin blockchain, where they are allegedly profiting from Covert ASICBOOST. After a long ordeal, Litecoin finally locked in and activated SegWit mere days ago.

There have been some other altcoins that also followed Litecoin's SegWit adoption, but their stories aren't that interesting.

The price also reflected that - going from under 5 USD/LTC at the start of the year with about 220M USD market cap, to a high of 35 USD/LTC and 1.8B USD market cap in the recent weeks. While this would normally allow it to take #3 spot on the crypto market cap list, another network had a meteoric rise that came largely out of nowhere...


Ripple has had a mixed reputation in the Bitcoin community. It's the oldest and one of the most prominent Crypto 2.0 networks. It has been caught the ire of bitcoiners in 2013 for being seen as "pro-regulation" during US Senate hearings, declared dead in 2014 (Bitcoin has been declared dead over 100 times now), has been fined by FinCEN for Bank Secrecy Act Violations, etc. Ripple Labs have developed essentially a competitor to its own network - the Interledger Protocol.

However, more recently it looks like the company is going back to its roots and focusing on the Ripple network. It stated publishing quarterly market reports on XRPs and talking about its plans for the future. There are more and more news about various banks using its network. All in all, it looks like the market has warmed up to the currency: 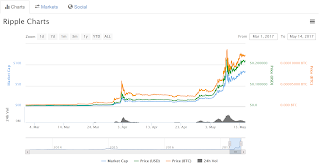 While we see a small blip on the chart in early April when it crossed 1B USD market cap, the currency started to enter a meteoric rise around the start of May (1, 2, 3). The year started with a market cap of 220M USD and a price of 0.006 USD/XRP, while currently it sits at 8.4B USD and 0.22 USD/XRP.

Now, let's look at how this all comes together.


At the time of writing, we this is how the market looks like:

Total market capitalisation of all coins: 55B USD, of which 25B USD are in altcoins. This means Bitcoin's market dominance is under 55%, while at the start of the story, it was about 85%: 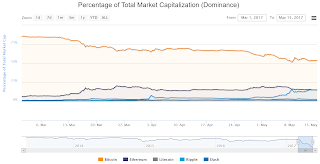 Bitcoin has historically been the "gold standard" for crypto. The market leader, the first mover, the biggest whale. However, it seems like in this market if you're standing still, you're moving backwards.

Since the start of our story, Bitcoin has periodically dipped in its price, but overall we're seeing all-time high price. The recovery was probably due to people worrying less about the potential network split that might come from Bitcoin Unlimited. Bitcoin is certainly stronger than ever, but there might also be blood in the water - despite the price of bitcoins rising, so too did the altcoin markets grew in leaps and bounds.

Whether this bubble we're in right now (and it certainly has the look of a bubble) will pop hard and the market will rebound in Bitcoin's favour, or whether a new paradigm will be made where bitcoins play less of a dominant role, only time will tell. It is very unlikely Bitcoin will ever sink too deep into the coin list, but if the scaling stalemate continues, Bitcoin's advantage will be eroded over time.

For years one could easily dismiss altcoins as being a fad, nowhere near as mature as Bitcoin. But at some point you have to realise you might have to compete for your top dog spot. We're living in a market that is used to exponential growth, and Bitcoin's market cap is "only" two doublings away from its next competitor.

We are probably in the biggest crypto bubble to date. Not only has once again reached its all-time high price recently, but the altcoins have also grew by leaps and bounds.

In the near future, I would expect some large contraction, especially in the alt market. Litecoin will probably dip back down now that SegWit is activated and its rally is over.

It will be interesting to see where the money will flow if the value of bitcoins will pop - whether people will be cashing out to fiat, or altcoins.

The biggest threat for Bitcoin is still the scaling issue - if that's not dealt with soon, the issue might just go away... along with many Bitcoin users that will switch to some of the alternatives.
Posted by ThePiachu at 23:25:00