As some of you might know, I really like the idea behind the Ripple system. Creating a settlement layer based on trust and IOUs, being able to issue any asset easily, working quite well as a middleware layer, incentivising specialisation, creating a singularity of money, all of that is great. The system is not without its flaws however - centralisation of validators is an issue, and so is the token distribution. While both are interesting topics, with the recent meteoric rise in XRP price, I think it's worth focusing on that part of the discussion.

Basics of Ripple and XRPs


Ripple is a Crypto 2.0 system launched in late 2012. It is based on a protocol predating Bitcoin by a few years, known as Ripplepay. As any good Crypto 2.0 network, Ripple allows its users to issue and transact in any currency. It also supports its own native currency - ripples, or XRPs.

XRPs have a few key uses on the Ripple network. They are used to pay transaction fees, and are required as reserves for any address using the network and creating trust lines. All in all, it serves as an anti-spam measure for the network. Moreover, since every account on the Ripple network can accept XRPs, it is also promoted as a bridge currency.

IOUs are user-created currencies. While any address can issue their own currency, most people will be using IOUs issued by gateways. Those will usually be denominated in fiat or crypto. The IOUs can be traded directly on the network, sent from one user to another, and even perform atomic, multi-currency bounces in a single transaction.

There are a few key differences between XRPs and IOUs. IOUs have a counterparty risk - if the issuing gateway defaults, the tokens will be worthless. You can only send IOUs to or through people that also trust the same gateway. The gateways usually charge a small percentage fee on every transaction. IOU transactions are a bit bigger and more complicated, meaning they can cost more to execute. XRPs are their own cryptocurrency, meaning they are not redeemable for anything directly.

Beyond that, the Ripple network handles both XRPs and IOUs identically - both can be traded on the decentralised exchange built into the network, both can be part of multi-currency transactions, both operate at the same speed and they are both highly divisible.


The main criticism levelled at XRPs and thus also against the Ripple network is the way the coins were distributed. Ripple Labs, the creators of Ripple, created the network with 100B XRPs in it, and no new XRPs were created since the network inception. This is not an unknown practice in the crypto space - a lot of networks premine their tokens. However, the network creators usually only keep a fraction of the tokens for themselves, preselling the rest to anyone that wishes to buy some. Ripple Labs however, still owns about 60% of the originally issued tokens. This raises a few issues.

First, the company could try cashing out and potentially crash the market. It is very unlikely however. Ripple Labs has recently taken steps to promote its XRP market and put the majority of their XRPs into an escrow (then again, the escrow is unlocking 1B XRP every month for the next ~4.5 years, so it could be better).

Secondly, since the network fees are paid through burning XRPs, they essentially enrich everyone in proportion to the amount of XRPs they hold (if 1% of the tokens got burned, the remaining tokens would be worth about 1% more provided the market doesn't change). This means Ripple Labs is essentially earning 60% of all network fees on the network. This probably doesn't amount to much at the current time, but may be more important in the future.

Lastly, the amount of XRPs owned by one company gives it a negative reputation. A lot of people in the crypto space dismiss Ripple outright as "a premined scamcoin" just because of the amount of coins owned by Ripple Labs.

All in all, that isn't too damning really. Ripple Labs appears to be reputable enough not to try cashing out of what appears to be their golden goose. However, they are not the only major players around...

The founders of Ripple Labs, Jed McCaleb, Chris Larsen and Arthur Britto gave themselves 20B XRPs early on. This later came to bite Ripple Labs in the ass. Jed left the team to start his own version of Ripple called Stellar, and decided to sell his XRP stash, resulting in a legal kerfuffle, a settlement, and a schedule for how those coins may be sold. If those numbers are correct, Jed is still cashing out 20k USD per week, and come ~2019, he will be able to cash out 750M XRP (worth ~256M USD at today's price of 0.34 USD/XRP). Not an ideal situation if the money from your network will be going to a former employee building your direct competitor to the tune of a quarter of billion dollars. While some of those funds might go to charity, that's still not an ideal outcome.

Now that we've dealt with most of the issues XRPs had to face, let's have a look at how XRPs fare on their own network.


While Ripple the network has to compete with Bitcoin, Ethereum and other cryptocurrency networks, XRPs the currency have another important competitor - the rest of the assets on the Ripple network. Some networks, like NXT or Counterparty, ensure their native token is at the centre of every trade - you can't trade IOUs for one another on those networks. In Ripple, you can transact purely in IOUs all day every day without touching XRPs for anything else than the fees.

This ties to the central value proposition of XRPs - being the universal medium of exchange. 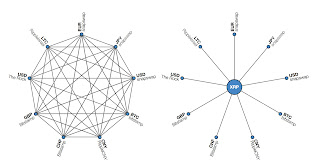 In short, the problem is as follows. If you have many different currencies on the network, you can have potentially a very large number of markets between those currencies (mathematically, twice as many markets as there are currencies). This means you would have to have a lot of market makers providing liquidity to every market. However, if everyone agreed to use XRPs as the common currency, you would only need to make one market per currency - between that currency and XRP.

The main advantages given for XRPs being better than IOUs are:


However, there are also some drawbacks to XRPs, even not counting the coin distribution and centralisation.

Just because someone can receive XRPs, doesn't mean they'll want to settle in XRPs. The network just essentially forces everyone to have an unlimited trust line to XRPs, even if they wouldn't want to hold them.

XRPs might be a decent universal currency for people that want to hold XRPs, but that might not be ideal for banks or big institutions. That's why we see networks like Corda, or even Interledger Protocol (also developed by Ripple Labs) that don't rely on a native cryptocurrency gain traction, while the best example of a real-world application relying on crypto token in the middle is Abra. Creating a universal, international settlement currency was the idea behind Bitcoin, and you don't really see banks using it for that cause.

Market making essentially boils down to either trading the currency like any other crypto, or copying the market from another source to offset your trades. The amount of liquidity you could copy with XRPs is small in comparison to the nigh-bottomless FX market from the real world. If you are going to see real-world use cases being deployed on Ripple, it will be more likely to see them leveraging the existing FX markets rather than going through XRPs.

While XRPs have no counterparty risk, they also have no counterparty protection. If anyone steals your XRPs, they are gone. With IOUs, you can still appeal to the issuing gateway to halt the transaction and potentially track down where it was withdrawn to. The IOUs are thus much less of a target.

On a similar note, XRPs are much harder to track, which would make them less appealing from a compliance standpoint. Gateways on the other hand can whitelist and blacklist addresses that can use their IOUs, thus having an easier time identifying anyone that uses their IOUs.

If a value of a given currency changes in value, you only need to adjust the market using that currency. If XRPs were the universal currency against which all of the currencies would be traded, any time the value of XRPs would fluctuate, you'd have to adjust the entire market.

Adding a new currency to the distributed IOU network wouldn't necessarily mean you'd have to trade it against every other currency. You could only start trading it against the most popular currency or a few currencies that are easy to make the market for (say, fiat<->USD, fiat<->EUR). Because you can easily execute multi-currency atomic transactions on the network, connecting to even one other currency connected to the network instantly means you are connected to the rest of the network.

XRPs have no transfer fees attached to them. While is possible for a gateway to issue IOUs without transaction fees (that's essentially Tether's business model, but on another network), perhaps even leveraging some other big crypto like Bitcoin or Ethereum through voting pools, the fees on those IOUs can always be changed. It seems that the network standard for transfer fees is about 0.2%, which seems to be smaller than the spread on XRP's biggest market (at the time of writing, 0.00015086 sell, 0.00015003 buy, giving about 0.55% spread). So it is possible that sending money through a very liquid FX market you would pay less in transfer fees than going through a less liquid XRP market on just the spread.

So this leaves XRPs with their primary role - paying transaction fees and fulfilling the needed reserves. All in all, about 50-100 XRPs per person / account would be enough for a lifetime of usage. That used to be less than 1 USD, and now is about 35 USD.


The Ripple network is a very useful Crypto 2.0 tool. However, because of the high flexibility and value propositions of the IOUs on the Ripple network, they are XRPs' main competitor in its home court. While XRPs are still needed to pay the network fees, most of the remaining value prepositions can be seen as overstated. The recent rise in the price of XRPs appears to be largely relying on market speculation (as is the case for all crypto) and a new exchange coming on the market.