Liquid - when sidechains say "fuck it"

We had big news in the Bitcoin world - Blockstream, the company that has been working on sidechains for awhile has announced they will be launching their first sidechain called Liquid. The announcement is all over CoinDesk, BitcoinMagazine, IHB and others. Unfortunately, when you look closer, what is being proposed is not really fulfilling the promise of sidechains...


Liquid is a settlement system for Bitcoin exchanges. It allows one to "[reduce] the time in which bitcoin-denominated funds can be transferred between accounts at these institutions" [1] and "allowing partner exchanges to move funds between order books without the need to transfer funds on the bitcoin blockchain" [1] for "an undisclosed monthly subscription fee" [1]. This will be accomplished by "[finding] partner exchanges transferring funds to a shared multi-signature wallet address, with a Byzantine round robin consensus protocol used to process transactions"[1]. The network will be run by known exchanges, essentially boiling down to a permissioned blockchain. The block signers will be running on proprietary hardware to prevent "tampering with the block signers when they are up and running [, further minimizing trust].".


Even more so than "blockchain", "sidechain" is a bit of a nebulous term. Blockstream, who are pretty much the main developers in this space have defined the term in their whitepaper as

"A sidechain is a blockchain that validates data from other blockchains"

I personally expand the term to "a blockchain with a distributed two-way pegged currency from other blockchains" (a quick refresher on centralized, decentralized and distributed definitions). Generally, it should be a system that is not rely on a handful of centralized gateway / bridges to move value back and forth between the networks, but a more protocol-level way of achieving deposits and withdrawals.

Having a one-way peg is dead easy - we've done proof-of-burn years back. Two-way peg, unfortunately, requires a soft fork in the Bitcoin protocol, or an entirely new system to be built from grounds-up.

Liquid is not innovative

Looking at what has been said about Liquid - it's not an innovative technology. It can be boiled down to:

The technology is nothing new - we've had multisig since 2012, and even frigging MtGox used a green address in 2011.

I'm also not yet sure whether Liquid provides some cryptographic receipts for deposits. If they don't - the network isn't entirely gox-proof. You may have proof-of-liquidity (balance in the multisig address), but you'd be lacking proof-of-liabilities - exchange clients or counterparties being able to prove who is owed how much in case the servers blow up due to incompetent PHP programming. Having a pile of bitcoins and a mob of people is not enough to know who is owed how much.

If Liquid has proof-of-liabilities or some other form of cryptographic receipts, that is great! It means they can be compared to Open Transactions' Voting Pools idea from 2014.

Now, to be fair - you don't need to be innovative to be useful, just be honest about it. What Liquid is, I wouldn't classify as a sidechain, but it can still bring a lot of value to their customers. That being said...

Liquid is not enough


Do I believe being able to speed up BTC transfers between exchanges is a useful thing? Yes. However, do you know what is the biggest pain point in Bitcoin exchanges and arbitrage? The fiat part. I'll be able to save an hour or two on my Bitcoin deposits to lock in a trade at a good exchange on another continent, but then I'll have to wait a few days for my fiat to move around so I can arbitrage in the other direction, great. Well, maybe pairing this with something like Tether would be good enough...

A few last points that don't fit anywhere before I wrap up:


Liquid looks like a very interesting project, but it's not the sidechains we are looking for. I guess it's a fair compromise between not being able to do anything because one needs a soft fork to implement the full vision and launching a whole altcoin just to have sidechains properly implemented. I guess you can only wait so long for things to improve before you say "fuck it" and create something between where we're now and where you're aiming to be in the future. 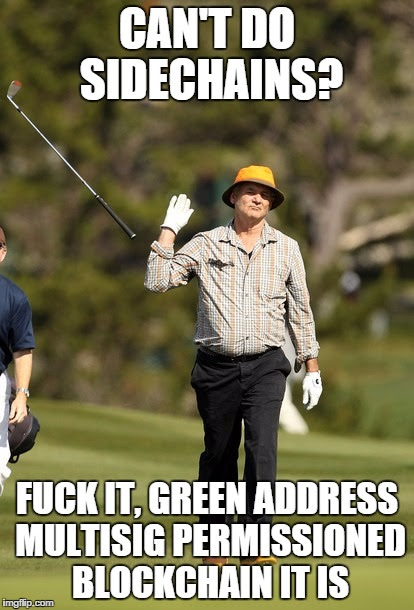 
I heard rumours about the proprietary hardware used for Liquid being secured by thermite that would destroy the hardware if it was tampered with. Reportedly, the hardware would have to be picked up in person as well. While I can't find a reference for those statements, if they were true it would make the situation even weirder (perhaps making it quite problematic for companies to get a hold of those outside of the country they would be produced in - try bringing such highly flammable package onto a plane...).