Specialists, not generalists - the upcoming service fragmentation in the 2.0 world

I am a strong believer in the Crypto 2.0 space. I see the world heading towards the Singularity of Money, where the currency we transact in won't matter as much as the value of that currency. Today, I would like to share with you my thoughts on how various services we know from the Bitcoin ecosystem might look in the "2.0 world".


In the current model, we have a lot of Bitcoin exchanges. Everyone is trading their local currencies to and from Bitcoin. Because of this, every exchange has to fulfil a few roles:


If the exchange fails on one of those aspects, they are essentially out of business - an exchange with a crappy trading engine is no good, neither is one that can't hold its BTC balance. Because of this, building an exchange is no easy task - you have to be proficient at all parts of your business.

Now, in the 2.0 world, a great deal of what an exchange does can be fragmented using the gateway model. Instead of dealing with everything, a gateway can focus on handling one part really well. We can have a gateway that handles only Bitcoin (onboarding, offboarding and securely storing BTC), and a separate gateway that handles only one fiat currency. Neither of them have to worry about holding more than one currency they know how to handle, and neither of them has to build any trade engine - that is either provided by the 2.0 system itself (like Ripple), or can be built separately.

Once we have a gateway for a given currency, that currency can be traded for anything else on the system - BTC for USD, CAD for EUR, gold for oil or whatever else you want. The market will decide what it wants to trade, and all the gateways need to do is provide IOUs for their currencies or commodities of choice.

Lastly, good money will drive out bad money - if a gateway is involved in some shady dealings (like MtGox in the exchange space), their IOUs will devalue quickly for everyone to see. In contrast, good and diligent gateways will secure the value of their IOUs. As nobody wants to hold inferior money, people will flock to the good gateways, leaving the bad ones in a subversion of Gresham's law.

All in all, in the Crypto 2.0 world we will see the rise in importance of gateways and a diminished need for exchanges.


Even though we will move away from the current proliferation of exchanges, there will still be a market for high-performance currency-agnostic exchanges. Usually the first place to trade IOUs from gateways will be the 2.0 system they are issued on - be it Ripple, Omni, NXT or something else. Since those are distributed exchanges, they can only settle so many trades and work so fast - a trade on Ripple might clear in 5 seconds, while a trade on Coutnerparty might take 10 minutes on average. There are some applications where you need to achieve higher speeds and transaction volume, and that's where we can see the rise of high-performance currency-agnostic exchanges.

The exchanges built on the 2.0 systems can be quite different from what we see today. They might only take one settlement method - the 2.0 network they are connected to, but would accept any number of supported currencies from that network. For example, we could have a Ripple-powered exchange that accepted BitStamp.USD, SnapSwap.EUR, as well as DYM - the silver dimes. Once the deposits are settled, the exchange users can trade them away using the high-performance trading engine. Once all the trades are settled, the withdrawals would similarly take place through the 2.0 network.

In general, while we might see the decline in the number of exchanges, we will also see the rise of high-performance currency-agnostic exchanges.


Similarly to how we currently have traders going into multiple exchanges and copying the market between one platform onto another in hopes of locking in some profit, we will see the rise of importance of market makers in the Crypto 2.0 space. Both the distributed exchanges living in the 2.0 systems and the various currency-agnostic exchanges will need liquidity from many markets. Since we will be dealing with a lot more currency pairs than just everything-to-BTC, we can see people copying the stock market, FX market, as well as copying the existing liquidity from Bitcoin and altcoin exchanges. Efficient market makers will get their trades and earn money, thus creating an incentive for many parties to compete and bring everyone the most competitive prices. Thanks to that, everyone will be able to get an FX rate for their currency conversion, rather than relying on "spot +-3%" usually offered by the banks.

In the 2.0 world, we will see a number of market makers copying the liquidity from the old world into the new.


Built either as part of the gateways, or perhaps as standalone services akin to ShapeShift, the 2.0 world will be connected to both the "old world" as well as between the various 2.0 systems through the use of bridges. A bridge in this context is a service that provides onboarding and offboarding between various systems in a convenient fashion. For example, if I go into the RippleTrade wallet (a wallet handling only Ripple) and decide to make a transfer from my account into a Bitcoin address, the wallet will figure out how to pay the recipient, even though they are on a completely different network: 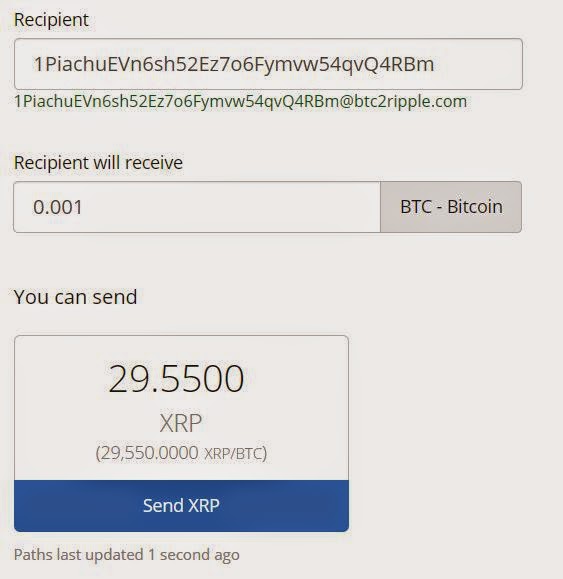 One can imagine the same bridge functionality for any other system - SEPA, PayPal, etc.

All in all, in the spirit of the Singularity of Money, we will see a lot more bridges connecting various systems together.


Just like with exchanges, the current model for services usually ties them down to a single currency. For example, we see Bitcoin-only payment processors like BitPay, Bitcoin-only ATMs like Lamassu, and Bitcoin-only wallets like Blockchain.info's wallet. In the 2.0 world, we will most likely see a lot of services become more currency-agnostic (like say, CoinPayments to BitPay).

All of the services will focus on what they do best while letting everyone else focus on their strengths. Lamassu might decide that it is really good at handling cash, and instead of also converting the cash into Bitcoin, it might either pay its customers directly in fiat IOUs from a gateway (USD cash in, BitStamp.USD IOU out for example), or perhaps use ShapeShift or other dedicated high-performance currency conversion tool to pay its customers in any currency converted on the spot through open APIs.

There is a lot of room for many companies to redefine themselves when transitioning from the Crypto 1.0 world into the Crypto 2.0 world to benefit from the network effect. In the end, if you can do something better than everyone else, you can still be in business letting everyone tap into your strengths as long as you separate them from your weaker points.

In the 2.0 world, a lot of services will focus on the service they offer, not the currency they use.

The connectors - putting it all together


The last important part of the transition into the 2.0 world will be the connectors - services that bring everything together and form a coherent user experience. Instead of going to all the services separately and managing everything yourself, you are very likely to see some user-focused all-in-one services. They might take a form of a currency-agnostic wallet that automatically connects you with all of the gateways to let you receive any currency you want, uses the bridges to deliver your money where it needs to go, perhaps even has some built-in handles into an exchange to allow you to trade on the FX market.

If the 2.0 world is ever to be mass-adopted, it will require a user-friendly layer that connects everything together.


When we transition into the Crypto 2.0 world, we are more likely to see more specialists, not generalists. Every service will have to re-examine their strengths to build on and weaknesses to move away from. This works similarly to the Principle of Comparative Advantage - even if you can do everything better than everyone else, focusing on your few key strengths and letting everyone else focus on their strengths might be better overall:

60 Second Adventures in Economics - The Principle of Comparative Advantage