This week at Decentral Vancouver we had a discussion with Michael Linton and Dominique Legault from Open Money about the LETS (full recording). LETS, or Local Exchange Trading System is essentially a community-run non-for-profit system for recording transactions, often using a form of a local currency. During the discussion various comparisons to the current Crypto 2.0 systems came up, along with some debate whether local currencies in general are good for us. Let us dive into these topics deeper.


Trust-based systems can be defined as a monetary system based on currencies requiring a trust that other parties won't default on their obligations. Examples of such systems include banks, gift cards, debt, as well as the aforementioned LETS, Ripple (minus the XRP portion) and Open Transactions. Counterexamples are currencies where you directly control the monetary asset transacted in, such as barter, gold or Bitcoin.

All trust-based systems can be boiled down to managing Trust and Debt:

Trust is the limit of how one person is willing to have the other person owe them, while Debt is the current amount owed. So if I Trust BitStamp for $100, I am willing to hold up to $100 of their Debt before they won't be able to send me any more money. If I hold $10 in balance from BitStamp, they are $10 in Debt.

These simple relations are pretty much how all of the modern banking works. A savings account is you Trusting the bank and them being in Debt to you at your current balance. A credit card is the bank Trusting you, and the amount you charge onto the card is how much in Debt you are to the bank. If I send money from my account to yours, bank's Debt to me is reduced, and it is increased for you.

Based on how Trust is placed, we can have 3 different systems - centralized, decentralized, and distributed: 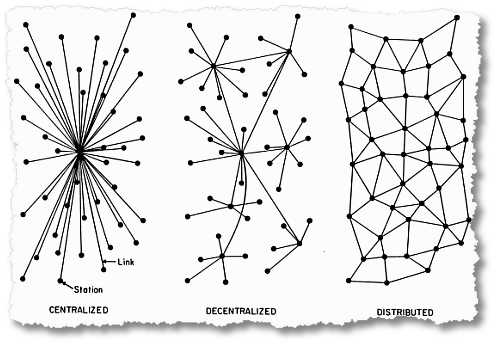 A centralized system is like a government issuing a currency - everyone in the given country is obliged to trust it and use it. The world economy is a decentralized system - every government issues their own currency, most people use one currency, but there is some connection between the systems. Local network of interpersonal debt ("I owe you $5 for the drink last night") is a distributed system.

All of the trust-based systems can take a form of any of the three systems. Currently, Ripple Classic and LETS are more focused on the distributed model, while Ripple and its gateways are focusing on the decentralized approach.

From a practical perspective, you will most likely have some combination of a distributed and decentralized model in your trust-based system.

The distributed model appears to be more useful when "liquidity" is scarce and there are more direct interactions on a community level. For example, if you have two people with no cash on hand that are capable of working for $10/hour, under the centralized or decentralized model they wouldn't be able to do anything because they wouldn't be able to pay one another. Under the distributed model, they can still work by tracking how much they each owe one another and settling the difference in kind. Similarly, the debt could be exchanged in a web of trust in the local community for different goods and services.

The decentralized model appears to be more useful when parties don't trust one another, but can trust some third party. For example, a person selling a $100k house might not want to trust a stranger to repay the debt over many years, but would be more willing to trust a bank or similarly large institution. This model is also useful for trade outside of your circle of friends as it reduces complexity. Sending money overseas in a decentralized model means going from you, to your bank, to recipient's bank, and to them, rather than possibly funnelling through a network of many people.


Gresham's law is commonly stated as "bad money drives out good money". It is often mentioned in context of money's nominal value (how much value is printed on the bill or coin) and its commodity value (how much the raw cotton or metal used to make the money is worth). To put it simply, people would value a silver dollar coin more than a dollar bill due to the metal, and as such would first spend the dollar bill.

When talking about trust-based money, the same issue comes up in a more interesting way. Say we have a local community money like SeedStock and a government-backed Canadian Dollar. If we have an inefficient market (it is hard to trade SeedStock for CAD), people might value SeedStock roughly around 1SS=1CAD and use them interchangeably as needed on the local level. The trades would obey Gresham's law and SeedStock should be spent first.

However, if we have an efficient market (trading between the currencies is instant and on the fly), we would discover the true value of SeedStock. Perhaps it would turn out 1SS is only worth 50 cents since too few places accept it, or maybe it's a more optimistic 95 cents. Whatever the value would settle at, that should be an equilibrium at which people would be just as willing to spend SeedStock as they would spend Canadian Dollars.

A practical example of this would be what PurseIO does - as it turns out, Amazon gift cards are worth about 80% of their face value when used to purchase Bitcoin.

Back to our systems - it is very likely that local currencies from the distributed model will turn out to be "bad money" (or at least worse than the alternative), while the money from big, decentralized gateways will act like "good money". The good money will probably also be used as a measurement of value, even when bad money will be used as settlement (I owe you $10 worth of my labour).

If we have an efficient market, no merchant will be interested in taking settlement in any bad money other than the one they issued themselves - if they can receive 10CAD or 10CAD worth of SeedStock, unless they need SeedStock directly, they would rather hold the good money. This would work until the entire market would either dry up or become inefficient, in which case there would still be a use for bad money to facilitate trade.


During our discussion at Decentral Vancouver, Michael Linton was arguing that local currencies in the LETSystem are needed to keep the local economy from drying up. We can illustrate the local trust-debt relations as: 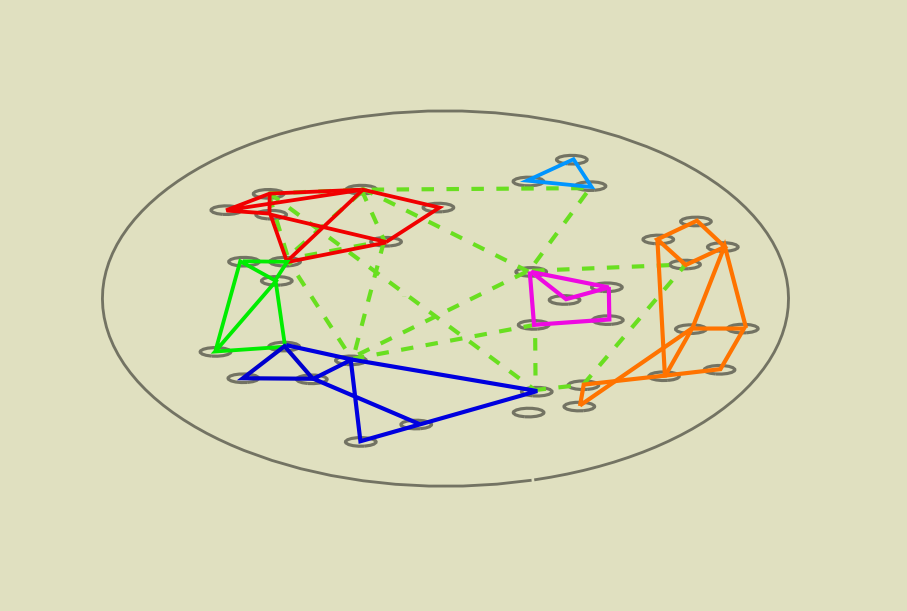 However, no matter what currencies we are using, there will always be a need for transactions between the communities in the modern world. Unless the system is hindered by not being able to trade between the currencies, those currencies will be traded and some exchange rate between them will be established. Just like with the modern world - whether what one community supplies is valued higher or lower will determine the exchange rate until there is some price equilibrium (say, if oil is 10% cheaper to buy and import from US than to buy locally in Canada, the economic system based only on that should value CAD at 10% discount until it is just as cheap to buy and import than to buy locally).

As such, the LETSystem is fine in allowing communities to issue their own currencies, but hearing the technical explanations, it appears inferior to Open Transactions and Ripple. Both Open Transactions and LETS were built for local pockets of transactions between individuals that were checked and validated by a third party (a notary for example). Communicating between the local instances is more of a problem in both systems. If that is an important feature of a system, Ripple is more suited for the task, provided you are willing to sacrifice privacy for transparency.


The LETSystem has definitely influenced many developments in the trust-based currency system for over 30 years of its existence. The decentralized and distributed currencies appear to be complimenting one another - one working better on a local scale and when liquidity is scarce, and the other one when there is less trust between the parties.
Posted by ThePiachu at 11:34:00